The Atlanta-based Coca-Cola Co. says several of its “trademark brands,” including Coke, Diet Coke and Coke Zero Sugar, will debut a 13.2-ounce bottle made from 100-percent-recycled polyethylene terephthalate (rPET) plastic in the United States in February. The bottles will be available initially in California, Florida and select states in the Northeast, “with other sparkling beverage brands following this summer,” the soft drinks producer says. Source: Recycling Today

Challenges around plastic packaging waste and recycling continue to be top of mind for our consumers, customers and our system. Introducing 100-percent-recycled PET bottles is a big proof point of how recycling can help create a circular economy.

On-the-go consumers have been telling us they want an option like this because it’s just the right amount for the ‘snacking’ occasion. We believe this innovation delivers the double benefit of convenience and sustainability.

The global company has introduced 100-percent-rPET bottles in other parts of the world, including in 2020 in Norway and the Netherlands in Europe. The U.S. is the 19th market to use bottles “made of recycled packaging,” says Coca-Cola.

In North America, Coca-Cola says it has additional plans for the use of rPET that include 20-ounce bottles to be used in California, New York and Texas starting in February; the debut of 100-percent-rPET Dasani and Smartwater water bottles in select states in March and July, respectively; and the launch of a 13.2-ounce fully rPET clear bottle for Sprite in select regions in February.

“All Sprite packaging will transition to clear packaging, which is easier to be recycled and remade into new bottles, by the end of 2022,” the company has announced.

Combined, the efforts represent a 20 percent reduction in Coca-Cola’s use of new plastic within its North American portfolio compared with 2018.

The company at times has been singled out by anti-plastic waste advocates as having its brand attached to considerable volumes of improperly discarded plastic packaging. The February announcement about the rPET bottles was met with skepticism by Washington-based Greenpeace.

While transitioning to recycled content helps to eliminate the need for some new fossil fuel plastic, it does not do nearly enough to end the cycle of plastic production and pollution. Since the 1970s, these consumer goods giants have joined with the fossil fuel industry to use recycling as justification to continue relying on polluting plastics. If Coke wants to make real news, it should announce that it is finally ending its reliance on plastics altogether.

The global company says, however, it is “closer to its World Without Waste goal of making bottles with 50 percent recycled content by 2030,” and Coca-Cola says more than 94 percent of its North American packaging is currently recyclable.

While we still have a lot of work to do to reduce plastic waste, by educating consumers about recycling and the potential for plastic bottles to become new plastic bottles, we see this as a big move in the right direction.

To build awareness and encourage action, Sutaria says all of the Coca-Cola 100-percent-rPET package labels will include “Recycle Me Again” messaging. “Our packaging is our biggest, most visible billboard,” she remarks. “We’re using the power of our brands, leading with Coca-Cola, to educate, inspire and advance our sustainability priorities.” 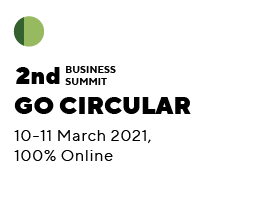