A partnership centered on polystyrene recycling

A partnership centered on polystyrene recycling

When Ineos Styrolution and Agilyx formed a partnership a few years ago, both companies were interested in finding ways to advance plastic-to-plastic recycling with a more specific interest in polystyrene (PS).

Joe Vaillancourt, CEO of Tigard, Oregon-based Agilyx, says many companies have been utilizing pyrolysis or advanced recycling methods to turn plastics to fuels, but he says his business is hoping to make more progress with using advanced recycling technologies to recycle plastics back to plastics, specifically PS.

Ineos Styrolution, whose parent company Ineos is headquartered in the U.K., and Agilyx first partnered in 2018 after signing a memorandum of understanding that allowed Ineos to deploy Agilyx’s depolymerization technology in Ineos Styrolution facilities in North America. The goal of the partnership has been to convert postconsumer PS into styrene monomer that can be used to remanufacture new PS products.

It was a mutual interest from both companies. Agilyx has developed innovative technology and is looking to scale it up, and that’s where we come in as experts at large-scale chemical and plastics manufacturing. We complement each other well, and there are mutual benefits on both sides.

In the partnership, Agilyx will secure feedstock for the plant, while Ineos Styrolution will connect to customers demanding recycled PS materials and bring recycled PS to market.

Vaillancourt describes the partnership like a bridge to ensure PS can be recycled back to plastic applications.

We help get the feedstock and convert the feedstock at our [proposed] facility built on [Ineos Styrolution's] refinery. Ineos takes the output from our facility and integrates it to the rest of their operation.

In December 2019, Ineos announced that the two companies would officially develop a PS chemical recycling facility in Channahon, Illinois, just outside of Chicago. Ineos Styrolution says the facility will be able to process up to 100 tons of postconsumer PS per day, converting it into a styrene product that will be used to make new PS products. The facility will use Agilyx’s chemical recycling technology, which breaks down PS to its molecular base monomers to be used in the creation of new styrenic polymers.

Channahon is currently one of our polystyrene production sites. Therefore, a recycled styrene monomer produced could be conveniently fed into our polystyrene plant without even leaving the facility. Channahon is located very close to Chicago, and it’s proximity to a major metropolitan area makes it a good source of polystyrene waste feedstock for the recycling facility.

Vaillancourt says collocating with Ineos’ facility will allow Ineos Styrolution to “synergize benefits.” The companies are currently in the engineering stage of the site’s development. The companies report that it will take about five more months to finish the design of the facility and they will likely break ground on the facility before the end of the year.

Vaillancourt says development of the Channahon facility has not been set back due to COVID-19, either.

We’re still going strong on this. Plastic-to-plastic recycling mandates haven’t been affected by COVID-19. There is still pressure to meet recycled content demand.

He adds that the pandemic has led to increased demand for single-use medical supplies and takeout food containers, which can use recycled PS. “In [the pandemic] there is a spike of uses of polystyrene, which has helped sort of advance it as a polymer preference.”

Looking ahead, Bradley says the two companies are hopeful to grow and expand the partnership to new geographic areas. “We see this expanding both nationally and globally in the future.” 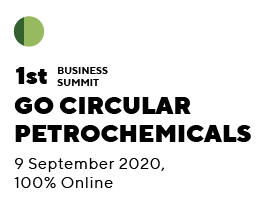